An ELP uses laser beams to pick up the signals (no digitization!) without physically touching the groove surface. One may think the distortion level would be much lower than using a stylus since there's no friction involved, and there would be no tracking issue at all. However, in reality there are other factors involved and the test results could be somewhat unexpected.

Using the eight tracking tests on the Hi-Fi News test record, the results are shown below. Some key observations:

1) Harmonic distortions, especially the 2nd and 3rd-order, are still quite visible on the spectrum analyzer, mostly similar to the case of using a regular stereo cartridge.

2) The strongest test signal in Test#4 leads to very high distortion, as can be seen in the deformed sine wave form. This level of distortion is in fact worse than some of the better tracking cartridges. But the good thing is, there's no skipping like in some cartridges' case.

3) From Test#3 to Test#4, the distortion level increases drastically, even though the difference in signal strength is only 2dB higher. Seems like somewhere between +16 to +18 dB, the threshold of the ELP's tracking capability has been crossed.

4) Tests#5, 6 and 7 corresponds to outer, middle and inner part of the record surface, respectively. The difference among them is smaller than most cartridges, showing the lack of side force interference is an advantage for the ELP.

5) Some unusual spikes in the spectrum are likely from dust particles on the record surface. The ELP cannot push away dirt in the groove like a stylus. 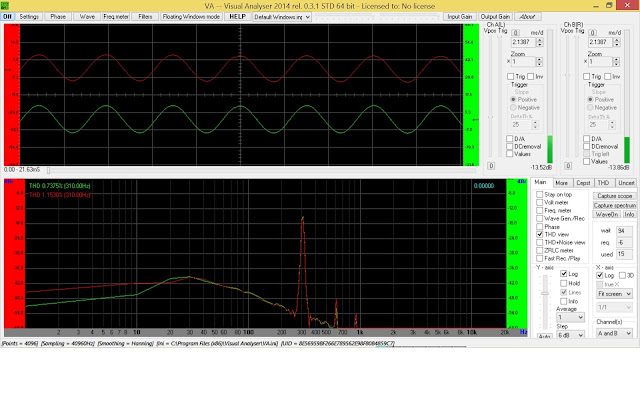 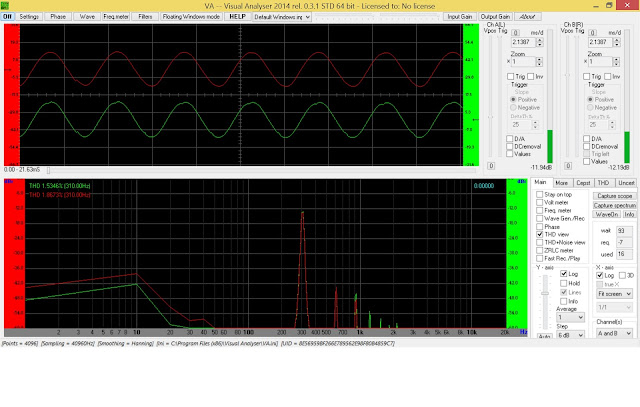 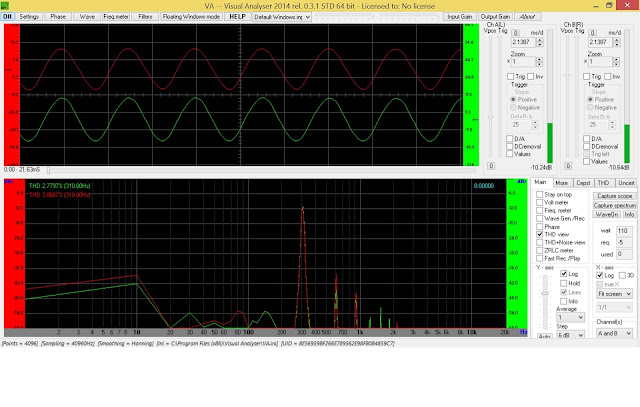 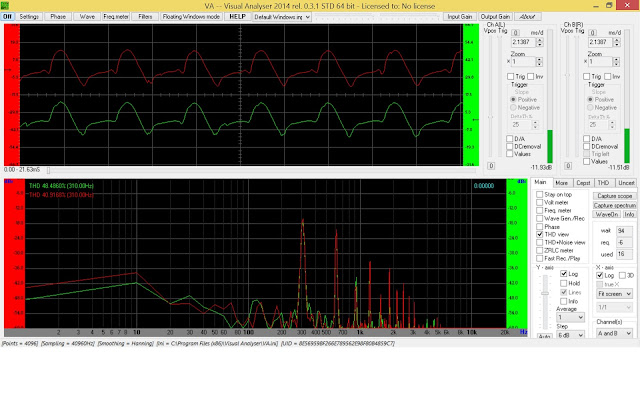 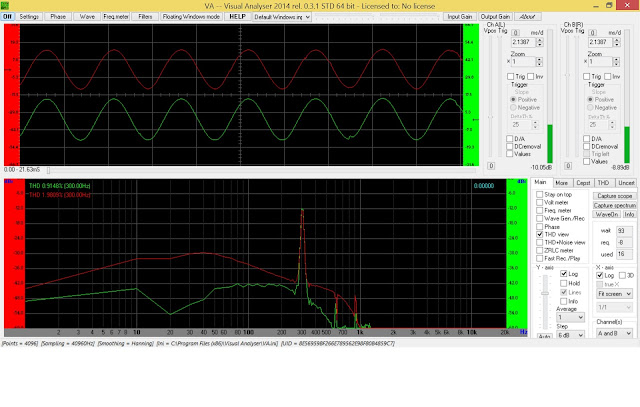 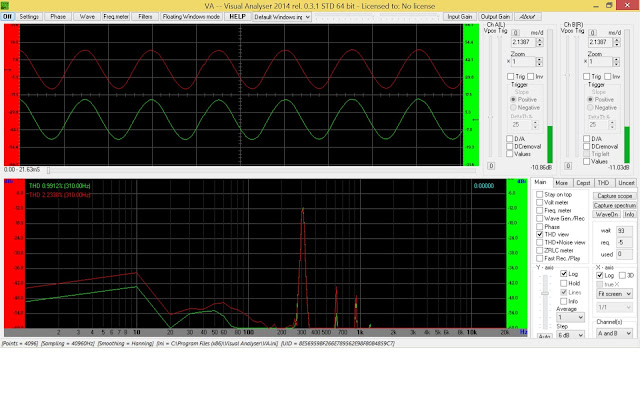 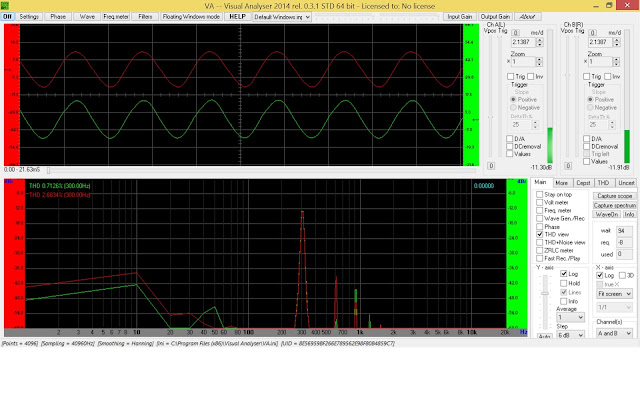 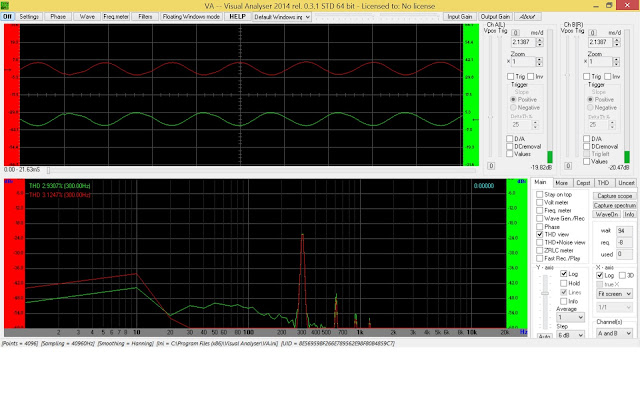 Two MC cartridges of the same model, one a mono and the other a stereo version, are measured here using the same 1000 Hz sine-wave test track. The mono version (1st chart below) shows a much lower THD% .

One can argue that, since the test track is in mono with only lateral modulation, any vertical movement of the stylus, which could be from imperfect record cutting, etc., is counted as distortion. A mono cartridge will pass on most if not all of the vertical movement, hence the measured distortion will be smaller than a stereo cartridge. 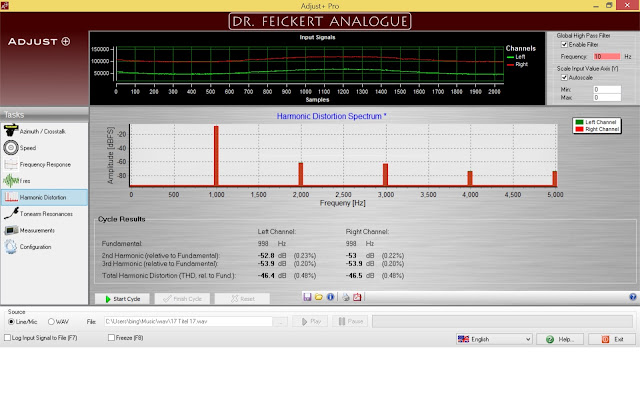 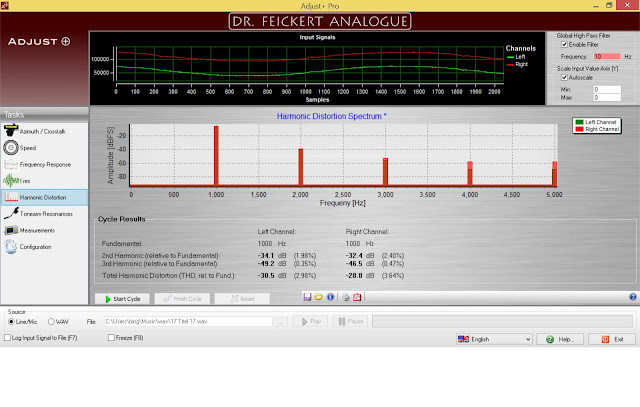 Why use X-ray to inspect a cartridge in its unopened package?

Why do we need to use X-ray to inspect a cartridge in its unopened package? Recently I've encountered several high-priced cartridges with very steep cantilevers, far greater than the 20-degree spec'ed in most user manuals. When communicating with the manufacturers, they either insist these are normal cases, or the anomalies have to be the results of user errors, asking for a service fee to make adjustments to the angle. If we can identify such issues before the box are even opened, then for sure we can say it's not from improper use of the product.

Many thanks to Alan C. Pan's willingness to test with the equipment in his clinic, and 黃崇斌's post processing! The results seem to indicate this may be a viable approach.

I was somewhat doubtful this would actually work before running this set of tests. In my prior experiments, I've found using a MC step-up transformer with various loading values in the phono stage would definitely impact the measured frequency responses. But I had been of the belief that, for the case of MC cartridges without using a step-up transformer, even though the impedance settings would impact the perception of overall tonal balance, the effects should be only in the harmonic compositions or even in the ultrasonic frequency range, presumably expecting no difference in normal frequency response measurements. However, the test results below quite clearly indicate the 500-ohm value indeed leads to the best "flatness" measurements in AnalogMajik. And in fact, this is the value I had found most agreeable with my ears before running the measurements.

I have run the tests using the Avid Pulsare II phono stage, with easily adjustable resistance settings of 10, 30, 100, 300, 500, 1k, 5k, 10k and 47k ohms. Only the most relevant data is shown below. All other values clearly result in inferior flatness data to the 500-ohm setting. 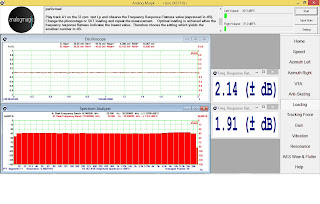 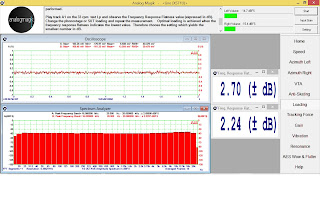 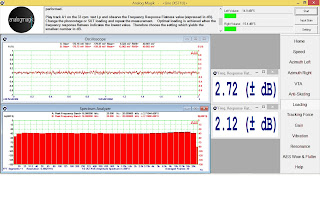 I used to use the HiFi News Test Record with Visual Analyser to observe the THD% and set the anti-skating force. Without touching anything, I use AnalogMagik's anti-skating function to check if there's any major difference. Turns out the two approaches mostly agree with each other, showing almost identical THD% numbers in both channels.

How sensitive can the IMD numbers reflect the SRA changes?

How sensitive can the IMD numbers reflect the SRA changes? Just about 1/4 of an mm's adjustment on the Graham Phantom II, the resulting differences in measurements are quite obvious as shown below. The sound also becomes much more refined with darker background and lower perceived distortion.